Our customer on-line order department will be closed from July 1 to July 11.

Orders will be filled through June 30th. We apologize for any inconvenience. 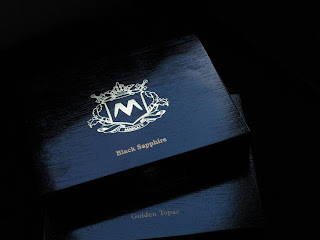 The Crown is an ultra-premium cigar that is single sourced from the Marco V farm in Jalapa, Nicaragua.  The Crown exclusively contains tobacco leaves that were hand selected and deemed to be the best from the farm and curing barn.

THE BLACK SAPPHIRE is a beautiful, flatly pressed, black cigar.  The cigar is wrapped in the famous San Andreas Maduro leaf which has been used by some of the most prestigious brands in the industry.  The long filler consists of a blend of Jalapa ligero leaves which were all hand selected.  The Black Sapphire is a medium-full bodied 6" x 52.

THE GOLDEN TOPAZ (GT) is a spectacular natural torpedo cigar.  The wrapper on the GT is the sweet Habano which can also be found on our Marco V Havana.  The filler is a showcase to the perfectly balanced and complex flavors generated from our blend of Jalapa tobacco.  The GT is a 6.5" x 54 medium bodied cigar.

The inspiration behind the Crown Series came from owner Marco V's quest to climb the Seven Summits, which is achieved by climbing the highest peak on each continent.  In February, Marco V summited Mount Kilimanjaro which is the highest peak in Africa.

Each cigar can be found in 20 count boxes shown above.