The Marco V Black Sapphire was rated a 90 in the Nov/Dec Cigar Aficionado Magazine!

Review of the Marco V Rio

On September 22 I had the opportunity to interview Marco Vito, head honcho of Marco V Cigars, during a Marco V event at Stogies on Grand in St. Paul, Minnesota. I must thank Marco for the interview and Stogies on Grand for permitting it during the event. In no way does the granting of an interview influence my reviews of Marco V cigars over the next few weeks. The cigars were purchased by me, not provided by Marco V nor by Stogies on Grand.

Marco Vito (born as Marc Keiser) grew up in a family of cigar smokers. He enrolled in the Entrepreneurial Studies Program at the University of St. Thomas in his hometown of St. Paul, Minnesota. An undergraduate assignment required Marco to develop a business plan. Working with the Business Plan Center in St. Paul, Marco developed a workable business plan for a cigar company. He put that plan (which garnered an “A” for the assignment) into practice and created Minnesota’s only cigar brand, Marco V Cigars. Part of his reason for developing his own cigar brand was his frustration when attempting to find cigars he both enjoyed and could afford. Even in Minnesota, with horrendous taxes on tobacco products, Marco V cigars cost about $7.00 a stick, an amazing bargain for a cigar of such high quality.

Marco spoke of the early days as a new cigar marketer: “We launched in 2009. From there it was very much a hustle business. I walked into all these different shops with unbanded cigars and said give these four cigars to your best cigar smokers. They didn’t know who I was. I’d give them the cigars and ask that if their best smokers like them to put us in stock. If they don’t, then don’t. With that marketing model we are now approaching 200 retailers nationally.”

Initially Marco V cigars featured only the Gigante size (5”X60) sticks. The Rio Gold (originally called the Brazilian) was one of the cigars Marco asked retailers to have their customers try. It is a thick, dark, intimidating-looking stick.

Marco spoke of his choice of wrapper: “The Brazilian grown rare dark Arapica wrapper goes well with ligero filler. We chose it for our initial release because it fit so well with the blend we wanted. It is a low yielding plant, so most manufacturers cannot use it much. We launched as a boutique brand, a small batch brand.” By manufacturing fewer cigars than some bigger names, Marco V can use some of the low yielding, rare tobaccos that others can’t or won’t use.

The Arapica wrapper provided distinctive notes to my Rio. The wrapper had an earthy aroma with noticeable coffee notes. The foot of the cigar offered rich espresso notes with a hint of pepper. The cold draw was rich and creamy with coffee and earth notes. Once lit the cigar really took off. The espresso notes were immediately apparent and remained the base for other notes to dance upon. A dry cocoa powder flavor developed with the first few puffs. That flavor transitioned into a bittersweet chocolate and later joined with the espresso to form a delicious mocha flavor. There were notes of red pepper, never dominant, but always present. I noticed a toasty, yeasty flavor from the Brazilian wrapper. It reminded me of freshly baked bread. Notes of raisin occasionally came through. The Rio was a rich, flavorful smoke, with an earthiness not often found in a maduro cigar. It was a delicious smoking experience.

The draw was great, producing a thick cloud of aromatic smoke.

The burn was good. I did have to touch up the cigar a couple of times, but that is common with cigars of such a large ring gauge. The Rio was as good or better than many maduro cigars costing far more. I highly recommend the Rio. If your retailer is not yet carrying Marco V product encourage them to give the brand a try, especially the Rio Gigante. 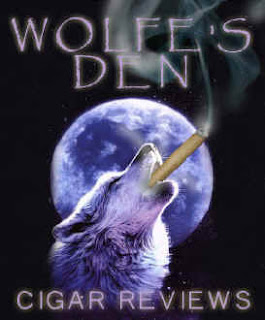